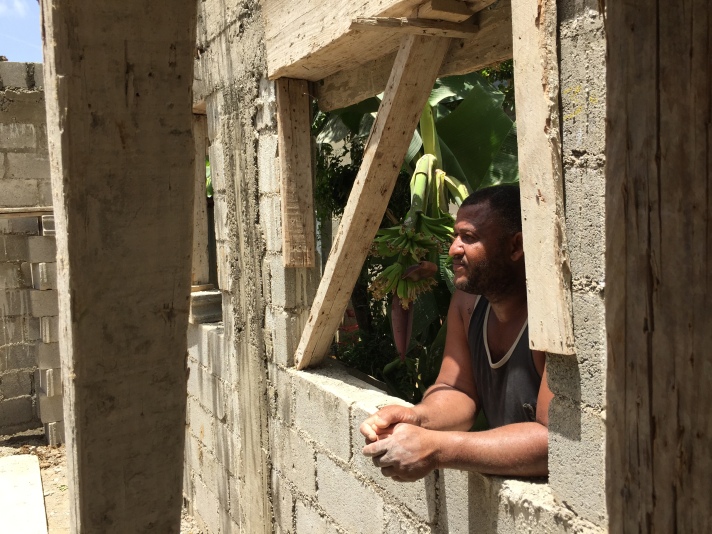 For six years I have traveled to the Dominican Republic to serve alongside John and Donna Bearden, members from Grace Fellowship, and believers from other churches. The work includes evangelism, Bible schools for children, fellowship with Dominican believers, and construction. The construction is always tiring, and this year’s trip was just no different in that regard, yet this trip was uniquely meaningful and incredibly special for the whole team.

The man you see pictured is Roberto. He is married to Noami, and they have two teenage children, Anthony and Melaney. They live in Villa Magante in a small concrete block house. When I say “small,” I mean less than 300 square feet, smaller than most bedrooms in the United States. They have no indoor plumbing. An outhouse covered with corrugated tin stands about two feet outside the tiny home. There was no electricity in the house, although none was needed; there were no appliances or even fans. They did have a spigot with running water, but the water isn’t safe to drink.

We met Roberto last year as we worked to help construct a water house to provide fresh, affordable water to the surrounding community. Roberto was there every day lifting 70 pound bags of concrete, shoveling gravel, and mixing mezcla (mortar) and cemento. We nicknamed him “the machine,” because he worked almost non-stop, only occasionally pausing for a drink of water or to wipe the sweat that poured down his face. What we didn’t know was that he was also a night watchman at a local school and was probably functioning on a just few hours of sleep each day in a little block house up a rocky dirt path.

When we discovered that this year’s project included construction on Roberto’s house, we were thrilled. In that brief week spent working beside him last year, he became a friend and brother. We admired his tenacity and determination. He spoke very little English, but we were able to express our affection for one another in smiles and sweaty hugs. Noami was much quieter and her hugs didn’t include concrete dust, but she, too, was a tendered-hearted servant of Christ who was part of a group of church ladies who prepared breakfast and dinner for us each day. The little family was the perfect picture of humble service. They had so little to give, but they gave all that they had. What a joy for our team to give something back to them.

When we first got to the worksite last Tuesday, the tin roof had been removed and the foundation for the new section of the house was ready. Our task would be to lay the block to nearly double the living space of the house, put on a small porch with a concrete roof to support a water tank to provide running water inside the home, pour the concrete floor in the new section of the house, and put on the roof, if time permitted. We would do this without a cement mixer and only a few power tools plugged into a generator. The concrete block was delivered at the bottom of the hill and had to be brought up by hand along a narrow, rock-strewn, uneven path. The mezcla and cement was mixed at the top of the hill and transported bucket by bucket passed down a line of perhaps fifteen people. It’s the Dominican version of a bucket brigade. It was hot, and the work was tiring, but smiles and laughter accompanied the calls for more mezcla.

I’m only scratching the surface here. Anyone who has been on one of these trips knows that the labor is both hard and rewarding. They also know of the interactions we get to have with the children in the community, the relationships we build with fellow believers, the bonding that occurs among the team members, and the opportunities for sharing the message of Jesus. It is an immensely personal and moving experience. Each person on a mission team comes to appreciate the blessings they have and comes to understand a little better the truth that joy and peace are not tied to material things.

We may feel that we’re traveling to another county to “do a favor” for the less fortunate, but we discover that in giving we receive, in loving we are loved, in serving we are served. We are reminded that we are one family regardless of the language or skin color or living conditions. We have the same Father in heaven, the same Spirit living in us, and the same Savior who died and rose again that we might have life abundant and eternal.

On Monday night, we sang songs in English and Spanish (at least we tried to sing in Spanish), and then set up a surprise for Roberto, Noami, Anthony, and Melaney. We turned on the lights at the mission house to reveal two beds, a refrigerator, and a small stove. When they move back into their house this week, these items will go with them. What we consider necessities are luxuries they have never had before. As we arrived at Hartsfield-Jackson International yesterday, we got pictures showing the roof was in place.

The picture at the lead of this blog shows a very content man. He has very little materially, even after our recent trip. He will likely never have very much materially. He was overwhelmed by the additions in his life, but these are not the source of his contentment. I have learned so much from this man. As he and I stood in clear waters of the Atlantic on Sunday, he communicated to me a simple message, “My heart is full.” Roberto, my brother, so is mine.

One thought on “Roberto’s House”