Sympathy Is Not Enough… 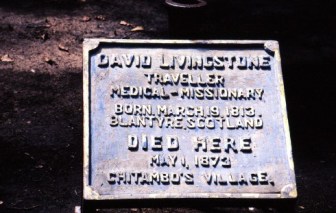 Livingstone, Zambia, is named after the famed explorer and medical missionary David Livingstone. You can find the body of Dr. Livingstone buried in Westminster Abbey, but you will find his heart buried near the site where he died in Zambia. It is fitting that his heart remained in the place where he invested his heart.

There is only one recorded conversion by Livingstone of an African to the Christian faith. He suffered greatly for his efforts, suffered many illnesses, lost his wife to malaria, and regretted spending so much time away from his children. He was an outspoken opponent of the slave trade, and his legacy led many Christians to become missionaries. And, in case you’re wondering, the one man he led to Christ was a village chieftain who led many others to faith in Jesus.

David Livingstone considered his service to Christ the highest possible calling. He wrote, “If a commission by an earthly king is considered a honor, how can a commission by a Heavenly King be considered a sacrifice?” His faith led him to action. Grieving for those without Christ was not enough for him. Appealing for missionaries to go to distant lands was not enough for him. He wrote, “Sympathy is no substitute for action.”

To have compassion is good but it is incomplete. To have compassion and to act on it is the thing. James, the leader of the Jerusalem church and brother of Jesus, wrote: “Suppose a brother or a sister is without clothes and daily food. If one of you says to them, “Go in peace; keep warm and well fed,” but does nothing about their physical needs, what good is it? In the same way, faith by itself, if it is not accompanied by action, is dead.” (James 2:15-17)