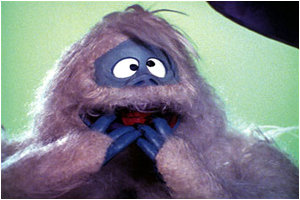 Christmastime is filled with traditions. Some of those traditions are sacred like Christmas Eve services, lighting the candles of the Advent wreath, and reading the birth narratives in the Gospels. Other traditions are secular like Christmas trees, Santa, movies like Elf, It’s a Wonderful LIfe, and Rudolf the Red-Nosed Reindeer. That final movie has been watched by my kids for many years.

The menacing character in the Rudolf claymation movie was the sharp-toothed Abominable Snow Monster or, as he was known by Yukon Cornelius, the Bumble. In our household, thanks to my father-in-law, the Abominable was called the Growly Man. Regardless of his designation, it appears that everyone around the North Pole tried to stay clear of him.

If you’re familiar with the movie, you know that things turned out alright for Rudolf and his comrades. No one was devoured by the Growly Man, in fact, the beast became quite harmless after Hermie the elf dentist performed a full tooth extraction on the unconscious creature. He could still growl loudly, furrough his fearsome brow, and waive his arms in threatening gestures, but his bite was gone. His threats were toothless.

The Bible teaches us that the devil prowls around like a roaring lion looking for someone to devour (1 Peter 5:8). That sounds really, really scary, but we need to realize that Satan is, in many ways, a toothless lion. I’m not saying that the devil has no power or influence. He does. But we often attribute to him power and authority in our lives that he no longer has. He’s loud and intimidating, but he is defeated and ultimately doomed. Should believers live in fear of this toothless growly man?

If you are a follower of Jesus, then you have been given some precious promises in the face of the Satan’s sound and fury:

“Little children, you are from God and have overcome them, for he who is in you is greater than he who is in the world.” (1 John 4:4)

“I can do all things through him who strengthens me.” (Philippians 4:13)

In one corner you have the toothless lion Satan roaring his head off trying to intimidate us and over exaggerate his power. In the other corner you have the Lion of Judah, Jesus Christ, who is fighting for you. Just a helpful hint: Go for the Lion who still has His bite!

We have a Savior who has already won. His resurrection after His crucifixion and burial kicked the teeth out of the devil’s mouth, and you and I share in that victory. Satan will continue to make noise, but God’s children must remember that his bark is worse than his bite.